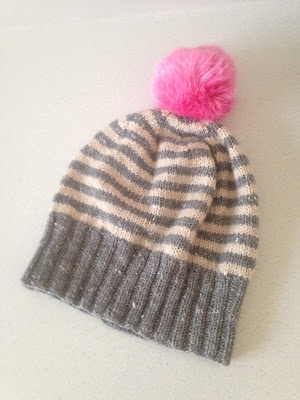 Well my friends, it is a very busy time of year for all of us. Lots to do, to plan, most likely to not do, maybe it is a good way to keep us distracted from the long dark nights and short dim days of December.  I am actually sort of on top of my knitting projects, but not much else.

There have been a few hats knit for Christmas and since none of my family ever looks at my blog, I am A- OK to post a few pictures.

There is such a big trend in knitwear to adorn knit hats with big bold glorious pom poms! I love pom poms!! There was a time when pom poms were less than fashionable and were, I hate to say it, sadly considered downright goofy and rather gauche. My kids would have died a million deaths of embarrassment if I had affixed a pom pom to their hats or even worse if either of us wore a hat with a pom pom on it. And were seen wearing it in public!! Well, times change and a certain fashionista has requested a chunky cable hat with a large faux fur pom pom!! 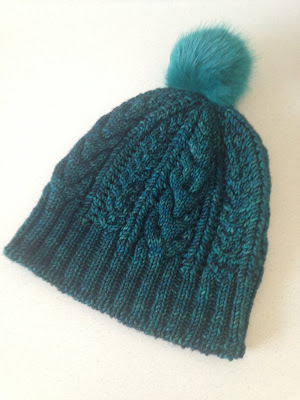 The hat in the top picture is Katahdin  knit with The Fiber Company Acadia. This is really really lovely yarn. Its a blend of silk noil, alpaca and merino wool. It is so soft and has such a nice texture. When I found the bright pink pom pom, I almost swooned! It is so perfect! I did make some mods to the pattern and changed the needle sizes.

The rich green hat above is the Bray Cap a great Brooklyn Tweed pattern. I knit it with Tosh Vintage in Cousteau. It's a very rich bluish green colourway. The emerald green pom pom I found looks perfect! I love it! This was a great hat to knit. 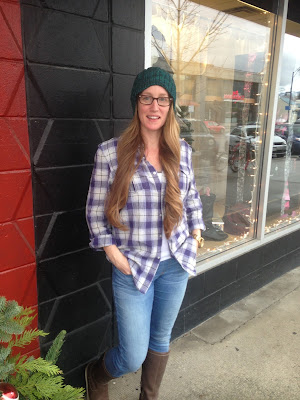 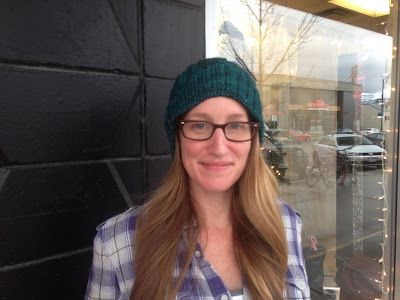 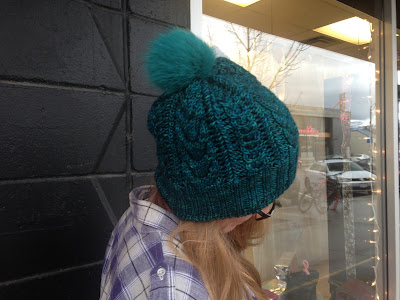 My buddy Melissa very kindly modeled it for me! 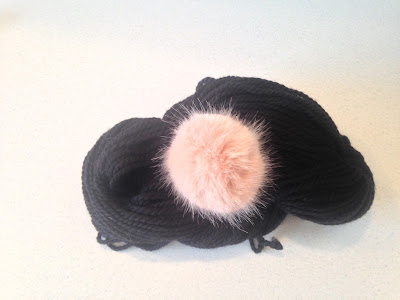 And this hat has yet to be made, it is the last hat (maybe) on my gift list. Enough hat talk, I have more hats for another day. I am reveling in all this glorious pom pomery!! 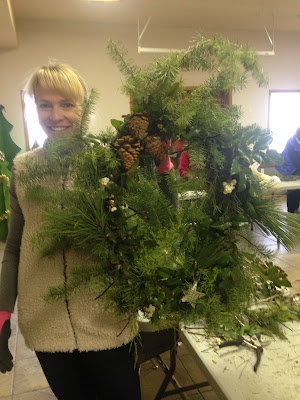 My friend Wendy and I recently attended a Green Wreath workshop sponsored by our Regional District. 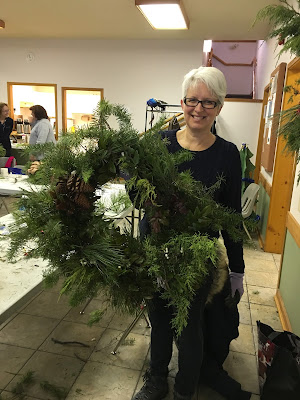 We were given materials to make green wreaths using plant and tree material we can all find in our yards and maybe our neighbours. It was loads of fun. We chose to construct a free form more organic design- at least that's what we called it. We really didn't have a plan. Now we are pros...lol!! 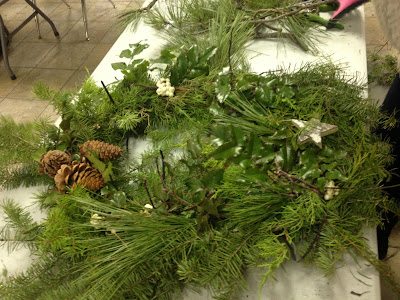 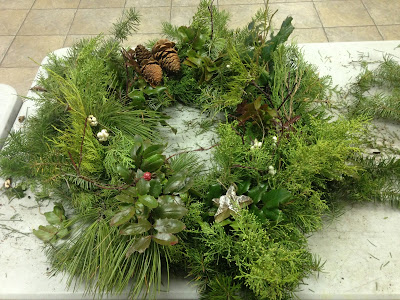 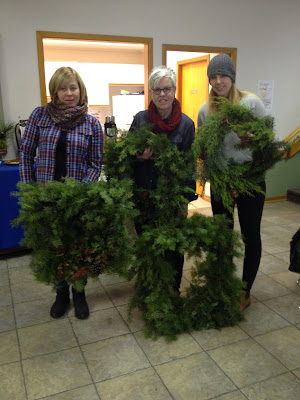 Our friends Pamela, Heather and her daughter Meghan went the next day. They had a plan ahead of  time. They wrapped old picture frames with chicken wire and then stuffed their greenery into the form. Their wreaths are beautiful! 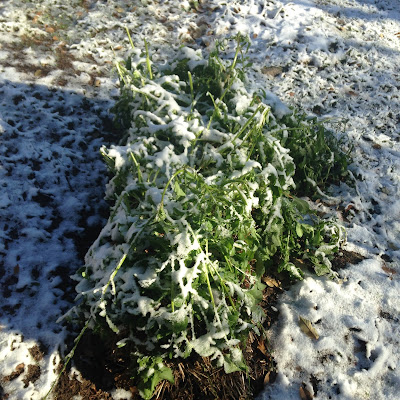 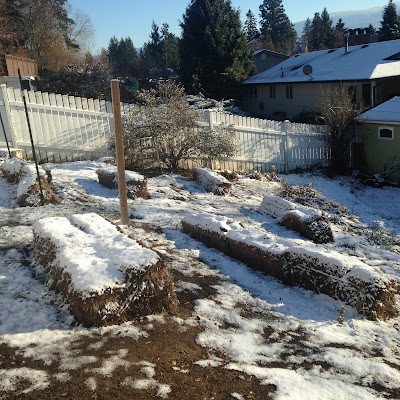 And then there are the bales. We had a very nice warm fall but an Arctic front swooped down into our Valley a several weeks ago. If you can believe it, we still had veggies growing in the bales. We quickly picked what was left of the tomatoes, ( turns out it was 70 lbs!) and lots of other veggies.We thought now that's that, the bales are done and off to hibernate for the winter. Bye bye bales! 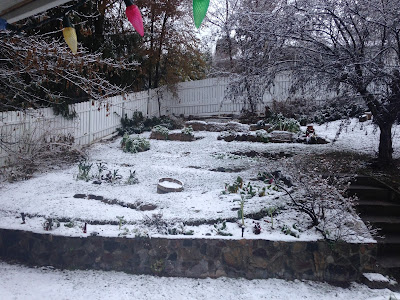 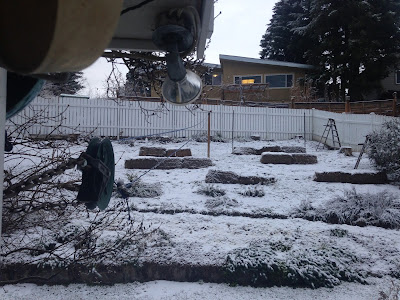 It got cold, really cold. The ground was frozen hard. I felt a little sad saying goodbye to the bales but truth be told, our love affair had cooled. I needed a break,a little time away.  I went out one afternoon and the arugula, chard and kale and the rest of the lettuce were frozen solid. It was OK, I had moved on.

A warm wet pacific front rolled in last week, bringing much needed moisture and above average temperatures. I looked out my kitchen window and I am looking and some of the greens were looking remarkably upright and green and dare I say, somewhat alive. It was like they were waving at me and saying "Hey Chrissie, you haven't got rid of us yet-don't give up on us!!" So I went out and can you believe it, the arugula, chard, kale  and some lettuce were alive. I picked a couple of bags of stuff for dinner. I just don't get it, and please don't get me wrong, I am ever so grateful but I am thinking this is really weird. Now I know you can extend the growing season if you tarp the bales with clear plastic but we just thought maybe we'd try that next year. Winter slothfulness has set in here! We have BIG plans for next year but we talk up a storm around here! 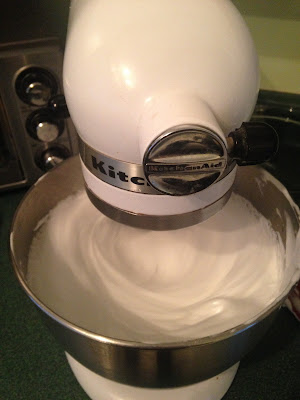 Lots of people online and on Pinterest rave about home made marshmallows so I thought I'd give them a try. They are currently resting in their pans overnight. I have no idea on how they will turn out or what to expect. They can made with lots of flavours, chocolate, cinnamon, squash, peppermint...etc. I am just joking about the squash, just checking to see if you are still awake. I'll report back soon on the finished product.