A Dustland Hat, Romance in the Squash Patch and a Cornbread Zucchini Recipe 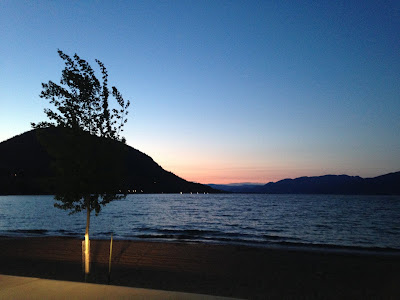 It is August already! It is still pretty hot and dry here.Nothing too exciting to report. Sadly, there are no great holidays planned to exotic locales or big events to attend but we do live in an area that many come to for their holidays. We are pretty lucky!


When our kids were young we used to pack the tent up and go camping. It was always rather exhausting after a week or so but great fun. We all still laugh about some of our trips.Usually (mostly every time) someone would eat too many treats and have too much sun and feel sick in the middle of the night. We'd hear " Dad, Mom I don't feel too well, I'm going to be sick!!!" We would have maybe three minutes to get that child's head out of the tent before everything came up. As we would scramble to get out of our sleeping bags in order to extract a heaving child out of their bag and to unzip the tent zipper, one of us would be grabbing a much needed flashlight.  Click click, the batteries would be dead. Our little goofballs would have run them down playing monster earlier in the evening. Good grief! That would usually be the signal it was time to go home. Often after braving bugs,bites, dirt, sunburns, sleeplessness, rain (it would always rain), sick kids, we would roll back into our sunny valley with our beautiful lake and look at each other and laugh.What were we thinking!?! 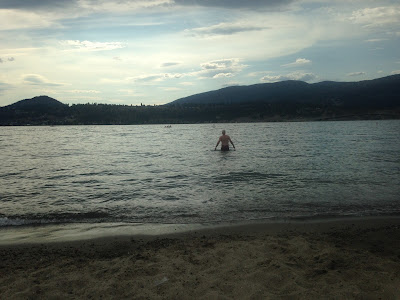 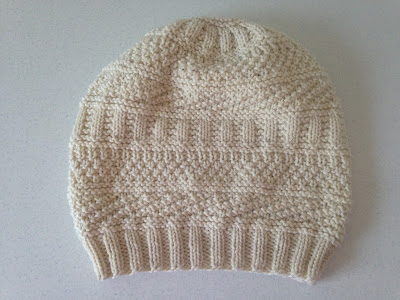 I did knit another Dustland Hat. I love this pattern, it's interesting to knit and easy to memorize. 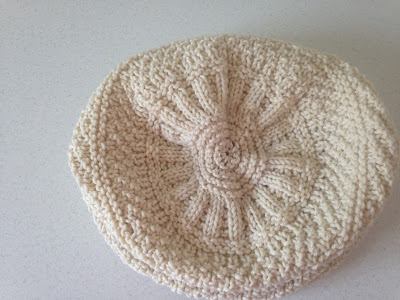 It has great texture. 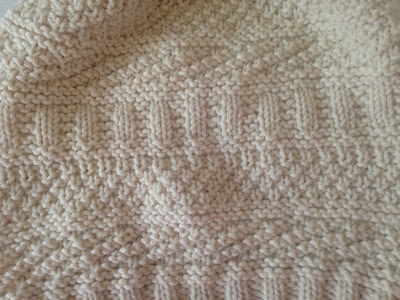 I knit it with Tosh Vintage in Antler. 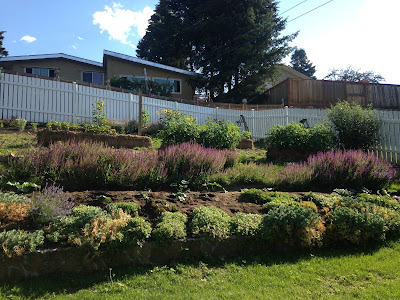 I think I have mentioned more than once our problem back yard.I took this picture back in June. Lots has changed since then! Our bales are doing what we want them to-maybe a little too well! My other challenge was this sloped bed in the forefront of the picture. Up to a couple of years ago, most of our yard was pretty shady in the back. Shade was thrown by our neighbour's  massive Cottonwood trees and some Chinese Elms of our own. Our old fence was removed and we jointly hired some tree fallers to remove those old dangerous trees. Subsequently our whole backyard became very sunny. We were really happy about that as now we would be able to grow more things. However what was able to grow in this bed did not survive the new hot dry conditions.

I initially planted a lot of sedums, spurges and sempervivums to help stabilize the bed. They worked quite well and gave lots of texture and some colour and most importantly survived the challenging conditions.With the arrival of Archie, the plants took a huge beating as he raced up and down the bank chasing interlopers and vermin . Now Archie is our daughter's dog but he has lived most of his three years here. Right now he is back being a condo dog with her and he is not too happy about that. (Neither is his best friend, my husband, but that's another story!) Anyway, this spring I was thinking what could I plant that would fill this space, deter his little lordship and survive the hot dry conditions. My brainwave was to plant some squash seeds. I figured they would cascade down and cover up the empty spaces and maybe we would get a few squashes out of the deal too. We thought we'd just go for it and plant a bunch of different types of seeds.When it came time to thin them we just relocated some in the bank to fill in some empty spaces. 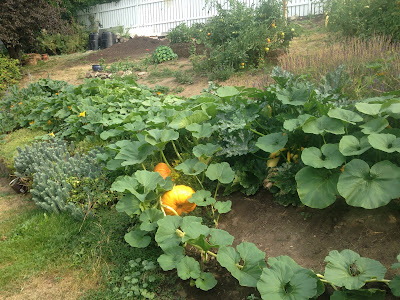 It did turn out to be a good plan but next time we do not need as many plants.The squash vines are traveling everywhere. (boy you can sure see how much things have dried out in a few months).


We have over planted and it is hard to see what vine or squash belongs to what plant. There are a couple of sugar pie pumpkins, two Cinderella pumpkins ,three zucchinis, two pink banana jumbos, a couple of straight eight cucumbers and I think a delicata and a butternut squash. Next year we will obviously space them out and reduce the number but honestly we thought it was a long shot on planting any squash there.

It is that time of year when you ask everyone you know if they would like a zucchini or two or more. Everyone knows someone who wants to get rid  share their abundance. We have been harvesting lots, but Brent did notice that all of a sudden we were zucchini bereft. Now why on earth would we would be worried about this all of a sudden ? Who knows but we were concerned! I read all about this plant, were the bees absent, where were the blossoms? I did not know there were male and female blossoms ( I thought they were self pollinators) and if it is too hot the plant will stop or reduce producing female blossoms and of course the vital role bees played.  It did appear that the few female blossoms we had, had not be pollinated. So I had to make sure love would be found in the squash patch Blossoms only last a morning so it is a brief one morning affair.

Rolling up my jammie bottoms I sent out to do my match making one sunny morning. As I was... ahem... pollinating the ladies, some bees took exception with my interference in their business. Maybe they thought I was threatening their job security. I was bitten five times around my ankles! (they weren't bad bites more like strong warnings, back off lady!!) Anyways I hot footed out of the squash patch. My husband thought it was pretty funny. I still go out and check things out and help matters along but I am a little more circumspect and no more rolling up my pant legs. Good news, we are back in production. 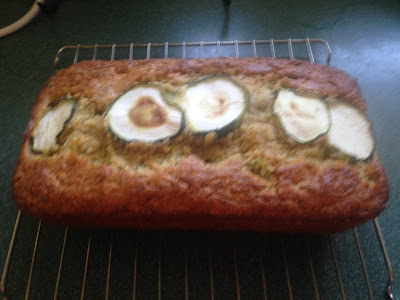 My friend Wendy made a delicious Cornmeal Zucchini Bread recently. So of course I had to make one too! The recipe can be found here. I love this recipe, it is so good! The cornbread is not too sweet so it will go with both sweet and savory foods. And it is a one bowl wonder. Yum!! Plus you use up two cups of grated zucchini-bonus! 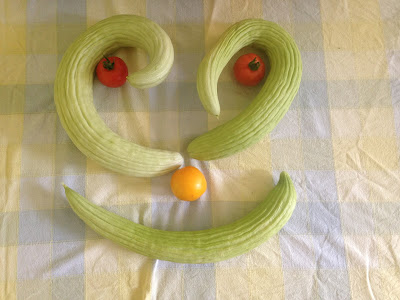